When Charles I was executed in 1649, May Day celebrations were declared illegal by the Puritans. Later, when the monarchy was restored in 1660 the date of the festivities was changed in many locations to May 29th, Oak Apple Day, in celebration of Charles II’s birthday and of his return to London.

At that time most villages held an annual feast or wake, many would also have had a village Maypole. Very likely Offenham Wake dates from this time and would have included competitions in cudgelling, boxing, wrestling and maybe donkey racing with a smock race for the women. It was a holiday for adults and not a children’s day as it now is. Present records show that not only very few wakes have survived but also that there are few remaining permanent maypoles including here at Offenham.

In 1890 the Evesham Journal reported that ‘the village (Offenham) has had a Maypole since time immemorial. One old man in the parish can recollect four being erected’. 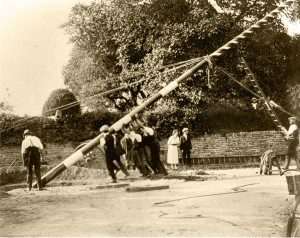 The Maypole being returned to a hole in the ground.

In 1983 an 80 ft. long larch tree was given to the village by Lord Neidpath from his estate at Stanway. After some 3 years of natural seasoning it was trimmed, cut to suit the base and painted.  This has now been replaced with a new pole, after some rot was found, the new pole is decorated in National colours continuing a tradition started in 1893 with the pattern divided as it was originally on the previous pole.

Wake Parade from the Maypole.

In 1880 the celebrations included a procession round the village with ‘the May Queen on horse­back’ and with rustic sports and dancing to the strains of Littleton Band’. After this the annual celebration appears to have included lowering the pole for re-painting; it certainly happened in 1881 and ’82. Around the end of the 1800’s the wake typically included a procession, to re-erect the maypole, headed by Offenham Brass Band, with a grand tea in the school and children sports, all paid for by public subscription. A large number of side-shows were provided by visiting showmen.

The present century has seen many changes in fortune for the Wake. In 1906 a church flower service was included for the first time. The Evesham Journal contains no references from 1910 to 1920 or from 1933 to 1949, when it was revived amid some controversy. It thrived during the 1950’s, based on the same format of tea, church flower service, children’s sports and amusements, until it again failed after 1966.

In 1971 it was restarted with Maypole dancing, a Wake Queen and a service at the Maypole, with other attractions, including a fancy-dress football match, on the recreation ground and in 1972 the first carnival was introduced.

1977 saw the Queen’s Silver Jubilee and the Wake that year coincided with the celebrations of this event. Since 1978 Wake day has taken place entirely in Main Street, with stalls on either side and an arena at the maypole. Typical Wake events now include Christmas carol singing round the maypole May Day events and the selection of the Wake Queen and her attendants. A typical Wake week includes an art competition for village children and children’s sports, rounder’s matches then Wake day itself. On the Sunday a treasure hunt, on foot around the village ending at the local public house where duck and bell boats races take place.

Wake Day, introduced by the church bells, starts with the flower service in the church followed by a procession to the maypole, headed by the Wake Queen. At the maypole a display of maypole dancing by village school children. During the afternoon many of the village organisations help with the success of the event by providing additional stalls and attractions, making it a truly ‘village’ day. There is no intention to raise funds – our purpose is to give a simple village entertainment but if spare income is available it is donated to village causes, particularly those associated with young people.

This site uses Akismet to reduce spam. Learn how your comment data is processed.